-
The Baldwin Hills Scenic Overlook has opened to the public!
The grand opening was April 18th, 2009--Here are photos, maps, planting lists and more...

http://picasaweb.google.com/Rare.Earth.fotos/BaldwinHillsScenicOverlookGrandOpening#
Posted by Rex Frankel at 9:26 AM No comments:

Tour Showed How to Have a Colorful Yard Without Watering 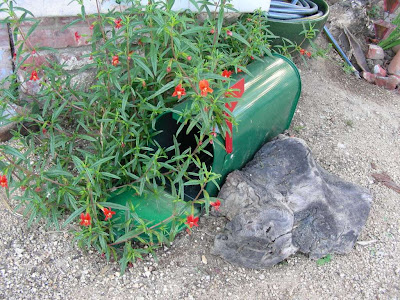 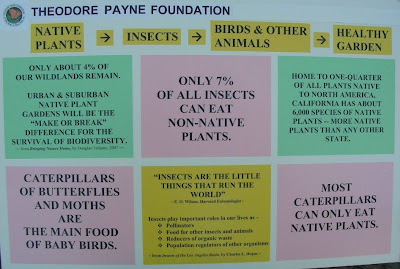 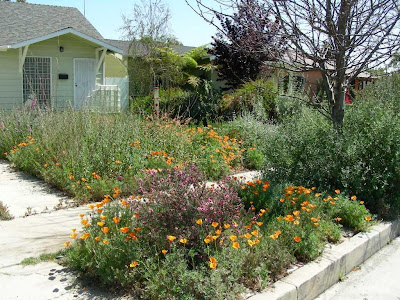 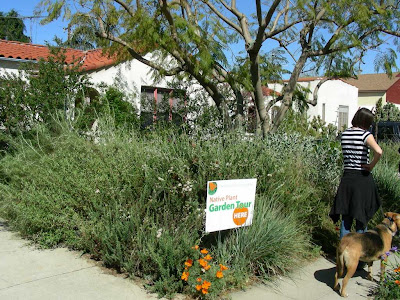 4/7/2009--Local gardeners opened their wildflower-filled yards to the public over the weekend to show how removing the old green lawn can give you a beautiful garden and use a fraction of the water.

The native gardens tour was sponsored for the sixth year by the Theodore Payne Foundation, which operates a plant nursery and “wildflower hill” in the eastern . The tour showcased front and backyards that were converted entirely to drought-tolerant plants that were here in before man arrived.

The native gardens featured an explosion of color, including orange poppies and mallows, purple lupines and wooly blue curls, red clarkias, monkey flowers and hummingbird sages, and blue lilacs. While a garden full of rose bushes is a feast for the nose, many of the native wildflowers have strong minty aromas, such as sages.

One of the Payne Foundation’s displays documented the benefit of restored native gardens in that they attract native butterflies, birds, bees and lizards.

Yet another benefit of native gardens is that they help homeowners save a lot of money on their water bills.

One of the tour destinations was the “garden/garden” at . There, two houses at have completely opposite landscaping, and dramatically different water and maintenance costs. For the front yard that was converted to all natives in 2004, water use is only 15% of the cost for the lawn and rose bushes next door. Maintenance for the native garden costs half as much as the conventional garden.

Saving water has been big in the news lately because the normal drought conditions that L.A. always faces has gotten much more acute this year due to a federal court decision to protect fish in the Sacramento River. The River located 400 miles from here is the source for up to half of ’s water supply. Recently, populations of fish in the river have dropped to near extinction-levels, and this has caused the enforcement of the federal Endangered Species Act to protect the fish. For water users, this has resulted in a 30% cut in the water supplied from that river.

Several of the gardeners proudly pointed out that they never water their yards because the winter rains are enough. Once native plants are established for one season, typically, watering is unnecessary except in a severe heatwave.

While most of the gardens were at private homes, there are several parks that feature all native landscaping in our local area.

Two are at the local Ballona Wetlands:

--Check out the Ballona freshwater marsh at the corner of Lincoln and Jefferson Blvds.

--Also try the Ballona bluffs trail at the top of , which can be reached by going up the hill from the intersection of and . Park at the mini park and follow the trail the runs along the top edge of the hill.

The Baldwin Hills/Kenneth Hahn State Park features several miles of trails through native sagebrush and wildflowers. The parking lot is reached from a quarter mile south of .

Finally, a beautiful 8 acre native park and lake that was created from a power company storage yard is , located at Slauson and Compton Avenues south of downtown