NOVEMBER 2006 STATE FISH AND GAME DEPARTMENT WETLANDS SURVEY SHOWS WE WERE RIGHT IN 2003: THE BALLONA WETLAND IS RESTORING ITSELF NATURALLY!!
The Department of Fish and Game has resurveyed the 600 acre State-owned portion of the Ballona Wetlands and has determined what a lot of ussuspected back in 2003 when the State purchase was being negotiated: a lot more of the land is a wetland than Playa Vista was admitting. For along time, Playa Vista was using maps of the "delineated" wetlands drawn up in 1992 during a five-year drought, first to say that very little was a wetland, and second, to show that only their development plan could restore the rest. What the revised (2006) map shows is that the land west of Lincoln Blvd. (highway 1) originally targetted for 1000's of condos is mostly functioning wetlands. The added areas are colored in purple on the map and are labeled "palustrine wetlands on fill". (This label is slightly off, however, in that the southern portion of the purple zone is not"fill" but is at the original 3 feet above sea level elevation and is densely covered in pickleweed and other marsh plants.)
here is a link to the map:http://www.scc.ca.gov/Ballona/documents/061011_tabloid_exist_habitat_digital.pdf

The crux of this is that when the State paid $139 million for this property, it was on the belief that a substantial amount of development could have been allowable under the State's Coastal Act. However, the Coastal Act bans any development upon wetlands. So it seems that it is likely that the State overpaid. While we are very happy to have this land saved, it means we were not being over-cautious when we questioned the sale price and the assumptions used to arrive at it. 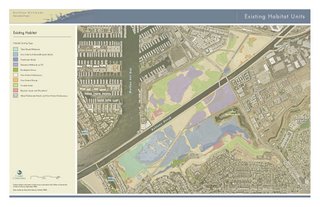 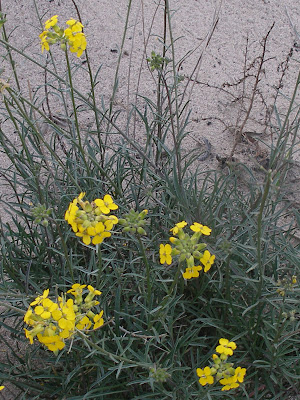 (the rare Suffrutescent Wallflower, photo by Jonathan Coffin)
A Guide to the Native Plants of Ballona and the Wildlife that Relies Upon It
(Please click on the pages to enlarge to full size. If using Firefox browser, click on image, then when larger image appears, click on it again to sharpen image) 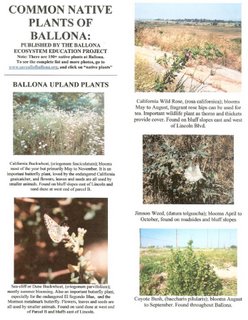 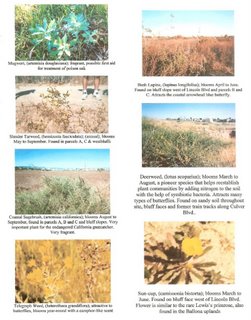 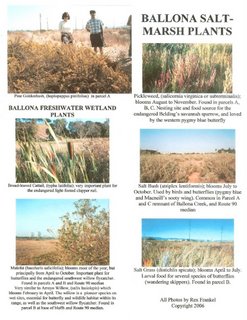